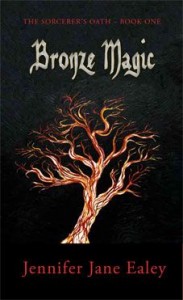 “What am I going to do?” he whispered into the darkness. “I’m locked in a forest with a horde of people who detest me.

In Eskuzor, land of sorcerers, Prince Tarkyn, nineteen, tempestuous and powerful in magic, is forced to flee from his brother the king, leaving a trail of death and destruction behind him.

When Tarkyn enters the forests in the company of an old wizard, he finds himself trapped in the forest; the unwelcome, bitterly resented liege lord of a people unknown beyond the woodland’s edge. Battling his heritage, Tarkyn strives to come to terms with these woodfolk whose service to him is spellbound to the welfare of the forest while Waterstone, a woodman just as fiery and honourable as the prince, fights his own prejudice and Tarkyn’s mistrust, in an effort to befriend him. But their mutual trust is fragile.

Bounty hunters are tracking Tarkyn. Wolves and sorcerers are hunting down woodfolk. How can Tarkyn protect the woodfolk when they do not trust him?  And how can he repair the rift among woodfolk so that they can face the greatest threat in their history? 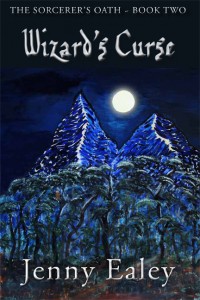 Reviled by Ekuzor’s sorcerers, Prince Tarkyn dismisses his wizard’s belief that he is the future hope for the nation. In fact, when Tarkyn steps in to defend a sorcerer family under attack by bandits, he finds them cowering in fear of him.

Banditry and lawlessness are becoming widespread as King Kosar’s rule is undermined by his twin brother Jarand and spurred on by Stormaway, people begin to question the truth of the king’s accusations against Tarkyn, bringing the exiled prince under increasing pressure to take up the sorcerers’ cause against his brothers.

But his more immediate concerns are those of the woodfolk, whom he is sworn to protect. Tarkyn’s efforts, as forest guardian, to heal a woodfolk family go disastrously wrong; destroying a swathe of forest and nearly killing him. Worse still, the unbridled power he draws on to retrieve the situation threatens to distance him from his woodfolk companions while Danton, Tarkyn’s sorcerer liegeman, finds his life threatened by the clash between sorcerer and woodfolk expectations.

Tarkyn rescues Midnight, a silent, scrawny woodchild from abuse and neglect. Does this child hold the key to the mountainfolk’s perfidy? Tarkyn must summon all his courage to face what will be asked of him to save these people from becoming forever corrupt.

And when the prince and his homeguard reach their journey’s end, Tarkyn engages in a mental duel with an embittered woodman, to gain knowledge that will stun woodfolk and sorcerers alike, with its implications. 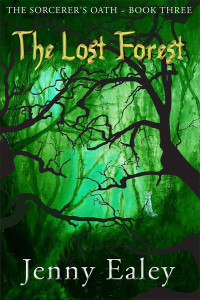 One mystical forest is unlikely enough. Two would beggar belief.

Caught in a wild snow storm,  Prince Tarkyn and his companions lose their bearings and stumble into the Lost Forest; a place of legend where people must face their innermost fears to find their way out. Hundreds of sorcerers and woodfolk have been trapped within the Lost Forest, some for centuries. But by whose authority are these people being held?

Tarkyn challenges the premise and power of the Lost Forest. But with change comes turmoil, opening a rift between Tarkyn and his woodfolk. To what lengths must he go to repair it?

Tarkyn’s liegeman, Danton, has his view of the world assailed firstly by a mysterious wizardess and then by sorcerer attack. In the aftermath, both he and those around him, including Tarkyn, must come to terms with changes that have been wrought in him. But how can Tarkyn drag his brothres out of their destructive rivalry? 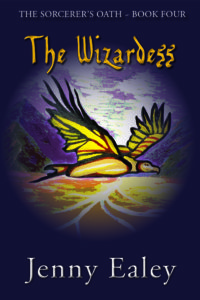 One man’s dream is another man’s nightmare

Released through Amazon, Create Space and Kindle in July 2013, on ebook in January 2014.

Released December 2015 as paperback and kindle

Release January 2017 as paperback and kindle